Projects that our advisers have played a leading role in 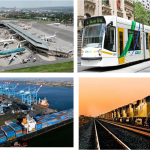 Airports Company South Africa – as strategic regulatory adviser, assisting South Africa’s national airports company in refinement of the regulatory frameworks in which allowed levels of charges are based.

Victorian Department of Infrastructure – design of payment mechanisms and risk analysis for a long term $1 billion concession for providing metro train and tram services in Victoria.

Essential Services Commission – development of the pricing framework to be applied to the intra-state rail network as part of the access arrangements to be approved the regulator.

SA Government – design of South Australia’s Channel Access Regime as part of the sale of SA Ports Corp. This work has included specification of the scope of prescribed services, broad pricing mechanisms, and technical and safety regulatory structures.

National Rail – development of a cost based pricing model for the inter-model terminal in Victoria and design of third party access charges for Terminal Service.

FreightCorp – financial and market analysis as part of a creditworthiness test of several counter parties to long-term haulage contracts.

Essential Services Commission South Australia – advising the SA regulator on the use of various forms of price regulation and application to those industries under its mandate.

Gold Coast Airport – development of a pricing model for access to the planned international terminal, building up from a cost-recovery model setting prices among a range of user classes subject to regulated return on assets.